Skip to content
Previous Next
The 60s in Jewelry

The 60s in Jewelry

The Do-Your-Own-Thing credo of the 60s transformed the world of jewelry design by exponentially exploding the factor of individualism far beyond the parameters set in the 50s. 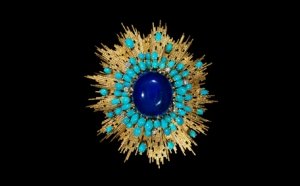 Creativity expanded like matter from the Big Bang and filled the jewelry universe with legions of creative artisans marching to the beat of their own drums. The major difference is because these artisans not only could design their own jewelry, but had the talents and expertise to manufacture and market it as well. In addition, experimentation with shape, form and texture was rampant.

In the 60’s, individual craftspeople, men and women alike, were encouraged to pour energy into their own visionary and nonrepresentational pieces.

Large gemstones no longer dominated, but became subordinate to the designs that supported them. The new freedom sent traditional taste and fashion packing.

Earrings were wild and wonderful, precisely because they did not take themselves all that seriously. Abstract, asymmetrical and whimsical, they were done in every color, texture, shape and material.

Bracelets were done as flexible, gem-set bands or rigid bangles, randomly studded with diamonds of various cuts, or with wavy bands of diamonds.

Similarly, solitaire rings lost ground to the three-dimensional rings of clustered stones. The outstanding look of the time was a large central stone raised above a cluster of other gems that flocked under it in a splintered effect.

The three-ring circus revelry that defined the decade naturally fell apart. The lunatic clothes, the loony-tune mores, and the grandiose adolescent rebellion. The entire bacchanalian abandonment of the 60s ended when the oil taps in the Middle East were turned off. For that reason the ushering in the recession of the early 70s and, inevitably, Childhood’s End.

Due to that ending came a conservative approach to jewelry design and use of gemstones. Diamonds in particular atarted to be graded by the Gemological Institute of America as retailers began to rely on their grading as a sales tool.

Learn more about the value of your jewelry, and sell your sell vintage estate jewelry to a trustworthy source.

When looking to sell vintage estate jewelry in the Philadelphia, give us a call.

Sell Your Vintage Jewelry to a jewelry buyer on The Main Line, PA. Many of our customers are in: Ardmore, Bala Cynwyd, Bryn Mawr, Gladwyne, Haverford, Merion, Narberth, Penn Valley, Villanova, Wayne and Wynnewood.