Arguably the world’s most iconic jewelry brand, the history of Tiffany dates back to 1837. This is when 25-year-old Charles Lewis Tiffany and his friend John B Young opened a small stationery and fancy goods store in New York City with the help of a $1,000 contribution from Charles’ father. 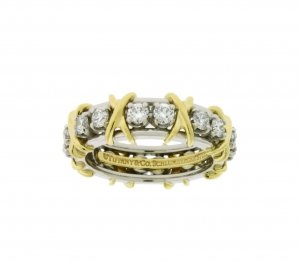 Located on Broadway, the Tiffany store quickly established itself as the go-to emporium for fashionable ladies in search of jewels and timepieces. It has a clean American style that represented a distinct departure from the opulence associated with the Victorian era.

As the first American company to adopt the British silver standard of using only metal that was 92% pure, Tiffany received international recognition when it won the grand prize for silver craftsmanship at the 1867 World’s Fair, Paris. However, it was not until 1878 that the link between Tiffany jewelry and the world’s finest diamonds was firmly etched into the history books.

Charles Lewis Tiffany also hit the headlines in 1887 when he shocked the world by buying one third of the French Crown Jewels. This earned himself the nickname “The King of Diamonds”.  After he passed away in 1902, Charles’ son, Louis Comfort Tiffany, became the company’s first official design director.

The Art Nouveau movement was gaining pace and Louis’ innovative, nature-inspired jewels, created using different materials. Some of the materials such as glass, gemstones and enamels, placed him at its forefront. He also established the Tiffany Artistic Jewelry department in the Fifth Avenue store. This enabled his jewelry and precious objects to be manufactured on site.

From this historic background Tiffany’s has become the largest jewelry retailer in the world with over 298 stores bringing in 698 million dollars in revenue in 2017.

No cost, no obligation consultation.

Learn more about the value of your Tiffany jewelry pieces and sell to a trustworthy source.

If your want to sell Tiffany jewelry in Philadelphia, Pennsylvania or Cherry Hill, New Jersey, give D. Atlas a call.

When looking where to sell Tiffany jewelry, contact us.
Our service areas include Philadelphia, Delaware and New Jersey.