Idar-Oberstein is a small town situated in the Hunsrück Mountains of the Rhineland-Palatine region in the south west of Germany. 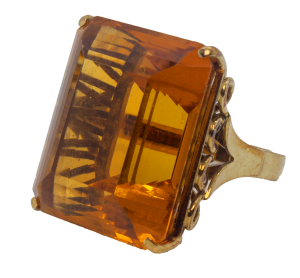 Despite its diminutive size, it became one of the leading gem-cutting centers of the world, with a history of mining and lapidary dating back hundreds of years. In the 1800s the agate deposits along the Nahe River began to be depleted. As a result, by that time gem cutting was the mainstay of its inhabitants. To stay in business, they began to import rough stones from Brazil. This is due to the fact that is where discoveries of amethyst, citrine, tourmaline, topaz and other gemstone materials had been made.

By the end of the nineteenth century, gems from around the world were being shipped to Idar-Oberstein for cutting by its famous artisans.

There were literally hundreds of cutting houses in the town and surrounding villages. However this very fame led to the end of the industry’s heyday – wages in the area. Therefore, it  became too high to warrant cutting less valuable stones and many gem-cutters were forced to emigrate to Brazil.

One of the most famous families in Idar-Oberstein today is the Munsteiner family. Berndt Munsteiner is known as the father of the fantasy cut. He is a third-generation cutter who says he was never asked whether he wanted to be a cutter or not. As a result, he simply fulfilled his parents’ expectations by training in traditional lapidary techniques with his father Viktor. He went on to become a pioneering artist. He used the techniques he learned at his father’s side to produce remarkable designs. However, they are anything but traditional.

In true Idar-Oberstein style, his son Tom carries on the family trade. For that reason, he is now known as one of the world’s leading lapidary artists in his own right.

An example of the outstanding cutting techniques developed by the cutters in Idar-Oberstein is this finely cut Citrine that has magnificent color.

Learn more about the value of your jewelry pieces so you can sell jewelry online or in person to a trustworthy source.