Skip to content
Previous Next
History of Van Cleef & Arpels

When Estelle Arpels, the daughter of a dealer in precious stones, met Alfred Van Cleef, the son of a stonecutter, it was the beginning of a love story that would have an enduring legacy more than a century later. 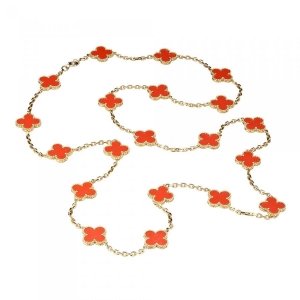 The young couple married in 1895, bound together by their pioneering spirit and shared passion for precious stones. The following year, Estelle’s father, Salomon Arpels, helped Alfred start a jewelry business.

In 1906, after the passing of Salomon Arpels, his son Charles Arpels and son-in-law Alfred Van Cleef founded the Maison of Van Cleef & Arpels, a boutique in Paris. The original boutique had an exceptional location. It was right across the street from the Hôtel Ritz. Most noteworthy, the hotel was a magnet for European aristocrats and important American business and industry tycoons.

One of the first standout pieces by the company was a bracelet with red and white roses, fashioned from rubies and diamonds. The extraordinarily innovative “Mystery Set,” is a technique whereby the stones are set in such a way that no prongs are visible. Furthermore, it was patented by Van Cleef & Arpels in 1933.

When World War II began, members of the family relocated to New York to help grow their business across the Atlantic. The famed New York City boutique on 744 Fifth Avenue, opened in 1942. The store still stands to this day. In New York, the Maison broadened their use of gold, semi-precious stones, and other materials.

In 1954, the company opened the “La Boutique” jewelry line at 22 Place Vendôme. These playful, whimsical cartoon-style animal clips were irresistible to many. They were more affordable than the Maison’s typical prices. They were intended as an accessible line for a broader, younger range of clientele. Even Grace Kelly and Jackie Kennedy Onassis collected pieces. Similarly, the jewelry was especially popular as gifts.

Now, 110 years after the first boutique opened its doors, Van Cleef & Arpels has secured for itself a lasting legacy as one of the finest jewelry houses in the world. In addition to exquisite jewelry pieces, the company also offers watches and perfume. The Maison’s flagship store at Place Vendôme is still thriving.

For the store’s 100th anniversary in 2006, it was redesigned by Patrick Jouin to incorporate a hybrid of Art Deco elements and 18th-century-style wood paneling. The new look embodies the simple elegance and dynamic creative energy that defines Van Cleef & Arpels. They have expanded their reach across the entire globe. They have standalone stores in Geneva, Milan, Shanghai, New York City, Beverly Hills, Chicago, Houston, Las Vegas, Naples, Palm Beach, Aspen, and more.

Learn more about the value of your Van Cleef & Arpels jewelry pieces and sell to a trustworthy source.