With her High Jewellery collection, Temple St. Clair celebrates a connoisseur level of gemstones with one-of-a-kind pieces born out of an ongoing quest for the rarest stones in the world such.  Many jewelry designs include patterned Lightning Ridge Australian Black Opal, electric blue Brazilian Paraiba Tourmaline, fiery African Tsavorite. In addition, her iconic Royal Blue Moonstone. 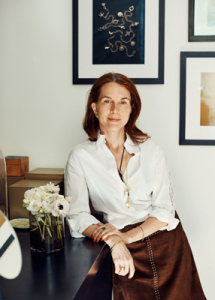 Temple St. Clair founded her company in 1986 in Florence, Italy.  That same year, St. Clair became the first fine jeweler to be represented and carried by Barneys New York. 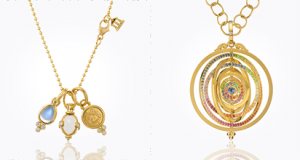 St. Clair’s Haute Couture Jewellery collection represents artistry that’s most collectible. Uncompromising in her choice of materials and execution, St. Clair explores themes. All the themes are meaningful to her through a lens of whimsy and discovery.

Meanwhile, her critically acclaimed, Mythical Creatures from The Golden Menagerie, made its début at the Louvre Museum in Paris in January 2015.

The second chapter of the Golden Menagerie trilogy, Wings of Desire, was presented at the Salon: Art + Design at the Park Avenue Armory in November 2015. In addition, the final chapter, The Big Game, is exhibited in December 2016 at the prestigious DeLorenzo Gallery in New York City. The Golden Menagerie trilogy explore humanity’s relationship with animals. For example, the fairy tale to the realistic, mythical, and imaginary. After that in 2017, Temple St. Clair joined Louis Comfort Tiffany and Alexander Calder. As a result she is the third American jewelry designer whose work is represented in the permanent collection of the Museum of Decorative Arts at the Louvre in Paris.

Her collections are sold throughout North America, Europe and Japan. In conclusion, Temple St. Clair’s jewels are treasured by devoted collectors around the world.

Learn more about the value of your jewelry pieces and sell to a trustworthy source.

When looking where to sell fine designer jewelry in Delaware, The Lehigh Valley, or New Jersey, Call D. Atlas Estates.

Sell your fine designer jewelry to a jewelry buyer on The Main Line, PA. Many of our customers are in Montgomery County including Bryn Mawr, Gladwyne, Haverford, Merion, Penn Valley, Villanova and Wayne.