His cable bracelets are a signature piece of jewelry that are now coveted by women all over the world. 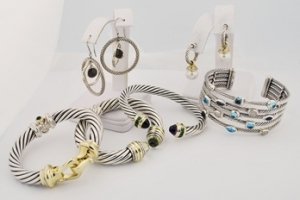 David Yurman, as a jewelry designer, is known throughout the United States as a jewelry craftsman and jewelry designer. There are 18 boutiques which include locations spanning from White Plains and Manhasset in New York to Beverly Hills. Today, David Yurman jewelry is worn by many celebrities. For example, Bradd Pitt, Charlize Theron and Renee Zellweger. The classic signature sterling silver cable bracelets are considered a staple for women. He currently enjoys a world-wide reputation for his jewelry.

Yurman was born on October 12, 1942 in Long Island, New York. From an early age, he was captivated with design and art. As a student, he sold statues out of the cafeteria at school.

He thought of himself as a designer and dropped out of college in the 1960’s. He is known to have mingled with such artist as Norman Mailer, Ken Kasey and Franz Klein.

Years later, Yurman was apprenticing with sculptor Jacques Lipchitz who previously worked with Picasso. He later met painter Sybil Kleinrock and they became a couple. Meanwhile she was spoiled her with his own jewelry creations which were admired by others who wanted to purchase them.

David Yurman and his sweetheart, Sybil Kleinrock, moved out of Greenwich Village to the countryside and opened their first company, Putnam Art Works in the early 1970’s. That is when they came to understand craftsmanship and jewelry design. The David Yurman line then became a brand.

In 2000, David and Sybil Yurman collaborated with the David Lipman advertising agency and photographer Peter Lindbergh. The first advertising campaign that was shot in St. Barts with Amber Valletta as the face of the brand. It was a lifestyle campaign, that communicated that jewelry could be an emotional experience for the wearer.

By 1980, his cable bracelets became his signature piece of jewelry and are now coveted by women all over the world.