Skip to content
Previous Next
History of David Webb

David Webb was born and raised in Asheville, North Carolina in 1925 and began designing jewelry at a young age. 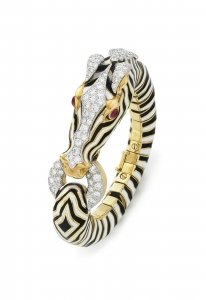 At age 9, David Webb was introduced to metalwork and quickly developed a passion for jewelry making. He eventually apprenticed at his uncle’s factory and at 17 and then moved to New York City to pursue his craft full time.

In 1948, Webb opened his own business with three employees around the corner from New York’s Diamond District. He crafted his own jewelry designs in his workshop. He then caught the attention of elite department stores like Bergdorf Goodman. Webb also became popular with the Ladies Who Lunch crowd. These women would travel in their chauffeured limousines to Webb’s business to make a number of jewelry purchases before returning to their Upper East Side homes for the day.

By the time he was 25 years old, Vogue came calling. The magazine featured a pair of Webb’s earrings on the cover of their October issue. In addition, Diana Vreeland, a noted columnist and editor of Harper’s Bazaar and Vogue, often seen wearing a David Webb black and white enamel zebra bangle.

Webb’s jewelry designs were distinguishable by their decorative, bold use of color and complete attention to detail. His design influences include his boyhood memories of the South to his explorations of faraway places and ancient cultures. Other important influences included Faberge, Cellini ,and other master jewelers from the 1800s and early 1900s.

Ruth Peltason, author of the book, “David Webb: The Quintessential American Jeweler,” comments on Webb’s style, “It was breakthrough jewelry. It was large. It spoke volumes. The rings are big. The jewelry has presence.”

Webb is possibly best recognized for his animal jewelry made of enamel. Inspired by an Indian sea monster, he created his first animal bracelet. It featured cabochon emeralds, circular cut diamonds, platinum, and gold in 1957. The bracelet was purchased by Elizabeth Taylor and has been referred to as the Elizabeth Taylor Makara Bracelet. Webb also excelled in his use of yellow gold as well as combining diamonds and semi-precious stones.

Webb died at the age of 50 from an aggressive form of pancreatic cancer in 1975, leaving behind an archive of beautiful, bold, and intricate jewelry. After his death, his legacy was preserved by his original business partner, Nina Silberstein and her family for 35 years. In that time, the company saw growth in new markets, such as Beverly Hills, Houston, and Kuwait. Today, David Webb LLC is now owned and operated by Sima Ghadamian, Mark Emanuel, and Robert Sadian.

If you like this Blog about David Webb jewelry, feel free to contact us for a no cost, no obligation consultation.

Learn more about the value of your David Webb jewelry pieces so you can sell to a trustworthy source.

When looking where to sell your diamond jewelry in the Lehigh Valley, Call D. Atlas Estates.

Where to Sell Diamonds in the Lehigh Valley include:
Allentown | Bethlehem | Coopersburg | Emmaus | Fullerton | Schnecksville