Skip to content
Previous Next
Art Nouveau: The Beauty of Nature

Art Nouveau The Beauty of Nature

Art Nouveau or New Art is an international philosophy and style of art, architecture and applied art – especially the decorative arts – that was most popular during 1890–1910. Inspired by natural forms and structures, not only in flowers and plants but also in curved lines, Art Nouveau horrified the Victorians, frightened the Edwardians, and had a great time doing so. 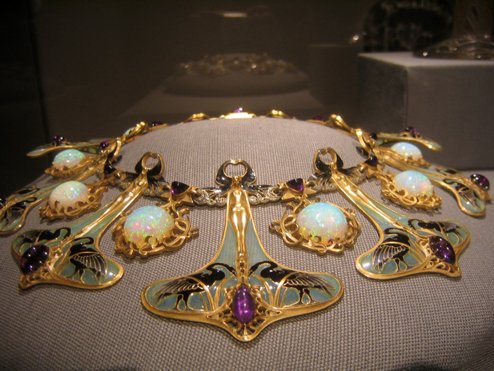 Although Art Nouveau’s time in the sun spanned roughly the period from the late 19th to the early 20th century. Some say, it also extended from the mid-19th century to World War I. Either way, it co-existed with the Victorians and the Edwardians in an unwanted and often volatile alliance. The jewelry vastly influenced Western art and architecture. Metalwork, textiles, interior design and, of course, jewelry were influenced as well. *Source: Chatelaine’s Antiques & Appraisals Magazine

Image Source: Lalique.
Those with such highly-respected names such as; Tiffany, Rene’ Lalique, Faberge, and Boucheron created gorgeous settings and nature-based designs.

Today, such colorful and elegant jewelry is in high demand, particularly by those who appreciate vintage rings, necklaces, and earrings.

Rene Lalique was the greatest of the French designers to promote the movement. He used materials made from horn to its fullest. They employed exquisite enamel and glass, with moonstones and diamonds for sheen and sparkle. Boucheron made sculptured jewelry pieces of chased enameled gold set with gems and pâte-de-verre.

In the United States, Tiffany was the forerunner in Art Nouveau. The elder Tiffany sent the store’s gemologist, George Kunz, to travel worldwide and bring back diamonds and gemstones. His son, Louis, went abroad to cultivate a taste for Oriental and Moorish art. On the home shores, Julia Munson Sherman developed the techniques for the famous enamels that would later be used in Tiffany’s signature jewelry.

Many other American manufacturers, including Clara Welles, William Morris, and Marshall Field also created pieces. Often mass-producing silver and jewels in the Nouveau style. They created beautiful and affordable jewelry pieces for the working populace.

In Russia the movement manifested itself in the glorious eggs of Peter Carl Fabergé, and the whiplash lines of his bejeweled enamel pieces.

From a Global standpoint, Art Nouveau jewelry stands the test of time. When looking for Philadelphia diamond buyers or if selling your estate jewelry, give D. Atlas a call. If you have such glorious pieces, and wondering about their current value so you can sell to a trustworthy source, contact Steven Schiffman for a no cost, no obligation consultation.

If your looking for Philadelphia diamond buyers, and surrounding counties,  feel free to contact us for a no cost, no obligation consultation. Learn more about the value of your jewelry pieces so you can sell to a trustworthy source.