Patek Philippe is one of the oldest and longest standing watch companies. In nearly two centuries of business, they’ve pioneered countless pieces of technology. 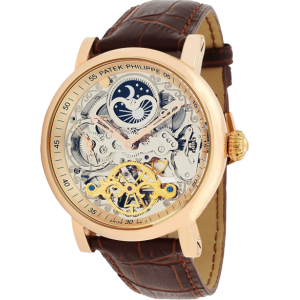 These innovations have contributed to the advancement of modern watchmaking and resulted in some of the finest timepieces ever made. Today, Patek Philippe is widely regarded as one of the premiere watchmakers in the world.

Their work began in 1839. That year, Antoine Patek and his partner François Czapek began creating custom pocket watches. Their clientele focused on royalty and other elite members of society. Five years later in 1844, Patek attended the Exposition Nationale des Produits de L’Industrie in Paris, France. It was here that he met a man named Adrien Philippe. At the exposition, Philippe was awarded a bronze medal for his innovative keyless winding and hand-setting system.

Within a year, Patek and Philippe went into business together, forming the brand we now know as Patek Philippe. Later in 1845, the duo produced their first pocket watch together using Philippe’s keyless winding and hand-setting system.

During Patek’s travels and focus on the business, Philippe remained committed to the development of the brand’s watches. In 1861, he finalized and patented his keyless stem-winding and setting mechanism. Two years later, he published a book on keyless timepieces. Later in 1863, he produced their first pocket watch with a tourbillon and invented a mainspring called the “slipping spring”.  This reduces the coefficients of friction preventing excessive wear and tear to the autowind mechanism.

Then, in 1868, the first Patek Philippe wristwatch was born. It included an impressive perpetual calendar, split-seconds hand, chronograph, and minute repeater. The next few decades brought about significant changes for Patek Philippe. Founder Antoine Patek passed away in 1877. Soon after, Philippe brought his son Emile Joseph into the business and began training him as his successor. In 1894, Adrien Philippe passed away as well.

Still, even without the brand’s legendary founders, Patek Philippe continued to be a leading innovator in the watchmaking industry. Emile Joseph perpetuated his father’s legacy for the next three decades. In 1932, the brand left family leadership for the first time. That year, the Stern brothers, who owned a dial manufacture in Geneva, purchased Patek Philippe.

To commemorate the company’s 150th anniversary in 1989, Patek Philippe debuted the most complicated wristwatch ever made, the Reference 3974. This timepiece featured a minute repeater, perpetual calendar, and moon phases and remained in production until 2000.

To this day, Patek Philippe continues to thrive under the Stern family leadership. They have grown to be one of the most highly regarded watch brands in the industry. Due to their superior quality and commitment to innovation, they continue to echo the vision of their founders.

We buy Patek Philippe watches and other brand watches such as Cartier and Rolex.

When looking where to sell your Patek Philippe, Cartier or Rolex watches in Philadelphia or Montgomery County and New Jersey, Call D. Atlas Estates.