The design period known as the Mid-Century ranged from about 1950-1965. The years following World War II were a welcome return to prosperity and led to a demand in luxurious jewelry to match the increasingly feminine styles of the time. 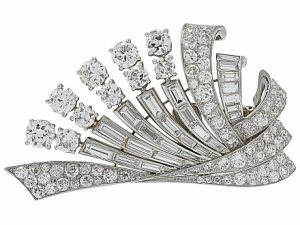 The designs of Mid-Century jewelry changed as well from the masculine, military styles of the ’40s to a more elegant, feminine look.

Jewelry designers began creating stunning confections of glistening diamonds, or bold, modern looks with gemstones. As a result, the linear styles of the previous decade gave way to voluptuous curves as in the pearls so popular in that era, or whimsical portrayals of animals, flowers, branches, and vines.

Signed designer jewelry from such notable brands as Tiffany & Co., Cartier and Van Cleef & Arpels became popularized through the mediums of film and magazines, especially in such movies as the classic “Breakfast at Tiffany’s.”

A concurrent Modernist movement introduced abstract high-end designs such as the starburst, anemone, or cluster motifs. The jewelry of the 1950s and 1960s differed from earlier styles mainly in terms of the production techniques used. In contrast with the heavy polished look of the Retro period, Mid-Century jewelry was made in gold openwork. Also highly textured in brushed metal, mesh and braided metal wire.

Matching jewelry suites were popular during this era, the necklaces shorter in length, with clip back earrings and flexible gemstone encrusted bracelets. Popular motifs included floral and foliate designs as well as whimsical portrayals of animals and people. Also popular were abstract designs such as the starburst and cluster jewelry.

If you like this Blog and want to learn more about the value of your jewelry pieces, contact us.  Sell your jewelry to a trustworthy source.

When looking for a Lehigh Valley jewelry buyer, give us a call. many of our customers are located in Allentown, Bethlehem and Easton, PA.