Before opening his own jewelry store in 1858, Frédéric Boucheron apprenticed at the fashionable Parisian jewelry house Deschamps. Though he started with little capital and a small stock of jewelry, Boucheron quickly attracted Parisian trendsetters’ attention. Among his specialties were lacy gold metalwork embellished with diamonds and engraved diamonds (uncommon still today). 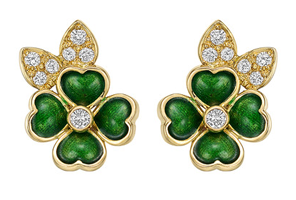 The gemstones he used were carefully selected for color and quality. Even Boucheron’s most accomplished competitors, like André Massin, praised the firm’s pieces for their “faultless craftsmanship.” The jewels were also unusual. As fellow jeweler and historian Henri Vever said, Boucheron designed jewelry that “very few of his colleagues would have dared to make at the time.”. As a result, the company developed a faithful and growing clientele including Tiffany & Co.

He died in 1902, leaving the firm to his son Louis. The business was in good shape. Nine years earlier, in 1893, Boucheron had taken up residence at 26 Place Vendôme, Paris. By the turn of the century, the firm had enough name recognition, and capital, to open branch stores in London and New York. In the early 1930’s, Boucheron expanded its presence to the Middle East and South America. Fred and Gérard Boucheron, Louis’s sons, literally carried Boucheron’s jewelry all over the globe. Often offering private showings to important clients. As the twentieth century dawned, they stayed at the cutting edge of fashion.

In 1962, control of the firm passed to Gérard’s son, Alain. Under his direction, they returned to materials it had used at the beginning of the century including: rock crystal quartz, coral, wood and turquoise. In the 1970’s and 80’s, Boucheron designers mixed such materials with diamonds and other precious stones. They are often large and impressive jewelry pieces. To this day, the designs often feature motifs from their past.  For example include carved multi-color gemstones, geometric lines, tassels and mesh elements in combination with more modern design. In conclusion they continue their reputation for impeccable quality and design.

Feel free to contact us for a no cost, no obligation consultation.
Learn more about the value of your estate jewelry and sell to a trustworthy source.

Sell your vintage jewelry to a jewelry buyer on The Main Line, PA. Many of our customers are in: Ardmore, Bala Cynwyd, Bryn Mawr, Gladwyne, Haverford, Merion, Narberth, Penn Valley, Villanova, Wayne and Wynnewood.