The History of Victorian Jewelry officially starts with the coronation of young Queen Victoria in 1837 and ends with her death in 1901 at the age of 82. 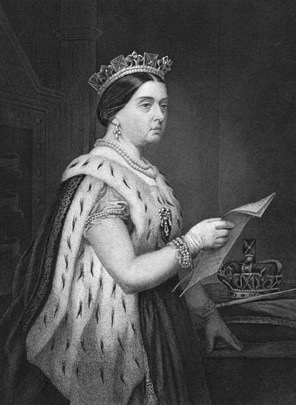 The Queen loved jewelry. She designed it, wore it, and gave it away as gifts throughout the rise of the British Global Empire to the inception of the Industrial Revolution. Her passion ignited the talents of the jewelry trade in London, especially during the death of her beloved husband, Albert.

The expression “The sun never sets” grew during the British Empire as Britain controlled 25% of the world’s economy. From India and China to the British Virgin Islands, and everywhere in between, the phrase supports that there was always at least one part of their territory that was in daylight.

Moreover, the Industrial Revolution created the 1st middle class in the history of the world. Also, England was known as a nation of shopkeepers.

The popularity of the era jump started mass production which also gave birth to what is known as the Arts and Crafts Movement, from 1870 – 1914. The Arts & Crafts Movement evolved through a complex series of historical events. All of the events were converging during the second half of the nineteenth century. Great enthusiasm had been shown for mechanization in industry during late eighteenth and early nineteenth centuries.

Much to the dismay of the industrialized world, many jewelers rejected the machine-led factory system, which was affordable. Instead, they now focused on hand-crafted, individual pieces. The process, they believed, would improve the soul of the workman in addition to the look and feel of the final design.

Suddenly, out from under the drab and lackluster tradition of mourning jewelry, a riot of enameled color and glimmering cabachons.  Additionally, sinuous design gripped the imaginations of a particularly ambitious group of artistic minded individuals.

Designers and Jewelers alike, leaned towards the natural beauty of shaped and polished gems, like those lovely cabochons. They shied away from large, faceted stones. They also relied heavily on curvy or figurative designs that had a symbolic meaning.

A single hand-carved semi-precious gem such as Intaglio or Cameo was an extremely rare and treasured possession. Artisans along the Italian coast carved Conch shell cameos by hand. There was a simplicity to carving shell over stone that opened up a whole new level of artistry. Because it was faster and more methodic, it grew in popularity.

Additionally, the cameo was both affordable and beautiful and was the perfect token of the Victorian tradition of the Grand Tour. This was a trip often taken by the upper classes of the Northern climes of Europe. They wanted to experience the art and culture and mild climate of Italy and Greece. Visitors would return with Italian carved shell cameo necklaces, rings, and earrings, or the even more highly coveted lava stone cameos. They were carved out of the earthy colored lava from the base of Mt. Vesuvius.

The industrial revolution continued with speed and voracity, and affordable manufacturing techniques. Pressed glass for glass intaglios, stamped or cast metal for settings, and chain making machines came with the period. Nobility and the wealthiest merchants were no longer the only people who could afford a selection of jewelry to accent their wardrobe.

While Queen Victoria may seem to take full credit for popularizing the charm bracelet and charm necklace, as we know it, she had a series of charms designed and produced.  She would give as gifts to her extended family and circle of friends every New Year.

Sadly, in 1861, Prince Albert died, and again Queen Victoria influenced the direction of jewelry design and production. She went into permanent mourning – wearing black clothing and black jewelry for the rest of her life. The ladies of England followed her example for many years inspiring a new type of material called Jet. This also created what is known as mourning jewelry.

People started making memorial jewelry because there was no photography. Therefore, if your loved one died you wanted something as a touchstone to remember them every day. Two examples include Jet and jewelry of the deceased person’s hair. While this may seem morbid, it was actually quite popular and remains historic and worth knowing more about.

To learn more about mourning jewelry and please visit the blog:Love After Death: The Beautiful, Macabre World of Mourning Jewelry by Meredith Woerner.

Jet is a fossilized driftwood found in abundance in Whitby, on the coast of Yorkshire. Carved Jet chains, Jet Crosses, Jet pins and earrings. Other styles of jewelry were offered in colorful gems, glass, and metal, now produced in Jet.

When you hear vintage jewelry or estate pieces, do you think about a particular era or even a person? Do you have an individual piece in your collection and you’re not quite sure of its history or value? Contact Steven Schiffman from D. Atlas Estates at 610.245.3100 to learn more about this victorious age and value of pieces that might be hidden treasures in your jewelry box or closet.


If your like this Blog, learn more about the value of your jewelry. Feel free to contact us for a no cost, no obligation consultation.  Sell your diamond jewelry to a trustworthy source.